We are all Hong Kongers now. Benedict Rogers: what should the world do to save free and autonomous city

Facebook and its messaging service WhatsApp, Twitter, Google, Zoom and LinkedIn stopped processing requests for user data made by Hong Kong law enforcement authorities because of a controversial security law imposed by China on the city on the 1st of July. Benedict Rogers, co-founder and Chair of Hong Kong Watch, thinks that there are three approaches to Chinese authoritarianism which should be taken simultaneously – punitive, diplomatic and rescue.

A week ago – as we marked the 23rd anniversary of the handover of Hong Kong – the world witnessed the death of the city’s freedoms and autonomy. Less than halfway through the promised fifty year lifespan of the promised “one country, two systems” principle, the Chinese Communist Party has flagrantly broken an international treaty and taken direct control.

For the first decade or so after the handover of Hong Kong to China, “one country, two systems” worked well. The city’s basic freedoms, the rule of law, judicial independence and the principle of “Hong Kong people running Hong Kong” were protected. In the past six years, however, particularly since the Umbrella Movement of 2014 and under Xi Jinping’s much more repressive rule, Beijing has increasingly eroded human rights in Hong Kong and undermined its autonomy.

From the abduction of Hong Kong booksellers to the disqualification of pro-democracy legislators and candidates, from the imprisonment of peaceful protesters to the escalating police brutality, the city’s way of life has come under increasing threat. In October 2017 I was denied entry to the city that had once been my home, on the orders of Beijing, and since then other foreigners – notably the Financial Times journalist Victor Mallet and the Executive Director of Human Rights Watch Ken Roth – have been expelled.

But now, the crisis has risen to an entirely new level. The imposition on Hong Kong by Beijing of a new, vaguely defined but shockingly draconian national security law decimates whatever remained of Hong Kong’s liberties and autonomy. That it was imposed by the Communist Party’s National People’s Congress, without even the pretense of going through Hong Kong’s legislature, makes a mockery of any vestiges of autonomy. Even Hong Kong’s Chief Executive Carrie Lam, a Beijing puppet, reportedly did not see the text of the law until it was approved by the National People’s Congress.

The law imposes severe punishments of up to life imprisonment for acts deemed to fall into one of four categories: subversion, secession, collusion with foreign political entities, and terrorism. And the problem is, Beijing’s track record of interpreting these terms – in the regime’s mind, any form of criticism or dissent is subversive, protests may be considered acts of terrorism, peaceful discussion of self-determination is secessionist, and contact with a foreign activist, journalist or Parliamentarian is collusion.

And, most absurdly, the law has an extraterritorial application – throughout the world. According to Article 38, it applies to non-HongKongers outside Hong Kong. So, in theory at least, when I speak out in London, I may be committing an offence under Hong Kong law. Moreover, almost the entire British Parliament, European Parliament, United States Congress, President Trump, US Secretary of State Mike Pompeo, and the British prime minister and foreign secretary may be doing so too. More seriously, Hong Kongers living abroad may need to think carefully about their security.

This law is not only an assault on Hong Kong’s freedom, but on every freedom-loving person everywhere. We are all Hong Kongers now.

Moreover, this week the Hong Kong government has expanded police powers to allow them to search private properties without a warrant, freeze assets, restrict movement, intercept communications, force firms to handover and decrypt information and censor the Internet. In other words, no one will be able to freely express themselves in Hong Kong at all.

The day the law was introduced there were large-scale protests and several hundred arrests. In subsequent days there have been some smaller acts of protest, including by people holding blank pieces of paper – and the police told them that holding a blank piece of paper might violate the law. Now than the police have been given sweeping powers the situation is profoundly alarming. Of course the pro-democracy movement will not go away but it will change it tactics, become less overt, more subtle, more creative, taking account of the risks under the security law.

I have long argued that Hong Kong is the new frontline in the fight between freedom and autocracy. That frontline has been lost – for now – and the threat to us all has moved closer.

And let us be in no doubt: if the free world fails to respond as robustly as possible, and in unity and coordination, the Chinese regime will not stop at Hong Kong. Taiwan is next in their sights and is now in real danger. 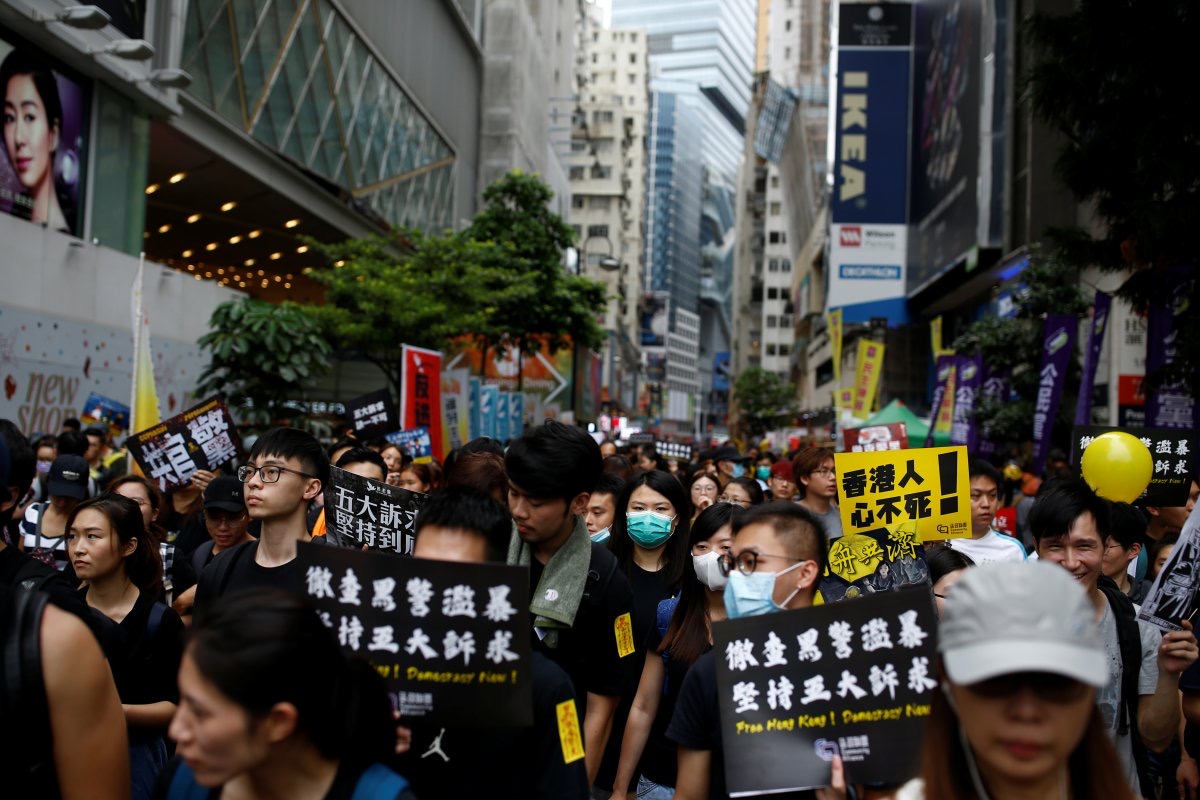 So what should the world do?

One country, two systems is clearly dead – as Secretary Pompeo has said. Recognising this does not mean surrendering our commitment to that principle – it entails recognising that the Chinese regime has done so, and must therefore pay the highest price.

There are three approaches which should be taken simultaneously – punitive, diplomatic and rescue. Every measure should focus on targeting those who broke their promises and who violate human rights, and helping those who are in danger as consequence.

First, a punitive response. This means targeted sanctions against individuals in the regime in Beijing and their puppets in Hong Kong who are responsible for human rights violations, as well as entities closely associated with the regime. This week Britain announced its “Magnitsky” sanctions measures – named in memory of the Russian accountant Sergei Magnitsky who was tortured to death in a Russian jail – and other countries, such as the United States, already have such measures. Bill Browder, whom Mr Magnitsky represented and who led a one-man campaign around the world for these measures over the past decade, deserves not just our admiration, but our action – by applying them to the biggest threat to China today, the regime in China.

Second, a diplomatic response, not to “negotiate” but to scrutinize and ensure that the eyes of the world remain on Hong Kong. This should involve the appointment of a United Nations Special Envoy and a Special Rapporteur on Human Rights in Hong Kong, reporting to both the UN Secretary-General and the Human Rights Council. Over 50 current UN Special Rapporteurs called for such a mechanism a few days before the national security law was imposed by Beijing, as did the former UN High Commissioner for Human Rights Zeid Raad al-Hussein and eight former rapporteurs. Like-minded member states in the UN should work together to urge the Secretary-General and the Human Rights Council to take this forward.

Third, a rescue response. This should only be the last resort, not the first reaction, but nevertheless we need to get ready. For while there will be brave Hong Kongers who will stay and fight and face jail, there will be those who decide that the cost is too high, who face grave danger, who see no future and who need to flee. Up to three million of those have British National Overseas (BNO) status and Britain has made a generous offer to protect them and give them a “pathway to citizenship”, but no one born after 1997 has that status – and many of the young frontline activists at greatest risk therefore are currently unprotected. That is why like-minded countries need to coordinate a lifeboat rescue scheme in order to offer such people sanctuary should they need it.

There will be brave Hong Kongers who will stay and fight and face jail. And there will be those who decide that the cost is too high and who need to flee

There are other steps that are needed too. Countries with extradition agreements with Hong Kong or China should cancel them now, so that those in danger under the security law’s provisions in Article 38 abroad are not at risk. Huawei and other Chinese telecommunications companies who are part of the Chinese regime’s apparatus of repression should be banned from our systems. We should diversify our supply chains. We should monitor what happens in our universities, media and political systems, to prevent the Chinese regime subverting our academic, media and political freedoms. And we should recognize that Taiwan – a vibrant democracy, an open society that champions freedom and that has handled the pandemic in an exemplary way despite being sidelined by multilateral institutions – is our friend: and we should stand by our friends. We should strengthen our relations with them, consider recognizing them and prepare to defend them.

For some time concerns about the threats posed by Vladimir Putin’s regime in Russia to liberal democracies in Europe and beyond have drawn attention, and rightly so. He remains a danger. But for too long western policy-makers have been asleep at the switch when it comes to an even bigger dragon, China – with whom Putin, in any case, is increasingly in cahoots. That dragon is now stirring with alarming speed, breathing its destructive fire over the once free and autonomous Hong Kong, and if the free world does not respond with strength now, that fire will consume our liberties too.

Benedict Rogers is co-founder and Chair of Hong Kong Watch, co-founder and deputy chair of the Conservative Party Human Rights Commission and a member of the advisory group of the Inter-Parliamentary Alliance on China (IPAC).