Uncle Sam is handling problems: Why would Zelensky meet with Sam Kislin, a man known for his connections with international crime?

The Insider collaborated on this article with Skhemi, a Ukrainian anti-corruption insnvestigations programm.

Ukrainian president Volodymyr Zelensky's visit to the USA coincided with a major political scandal in the country: President Trump is under threat of impeachment for his attempt of applying pressure on the Ukrainian government and trying to investigate the activities of Joe Biden's son, Hunter Biden, who had been on the board of directors in a Ukrainian company for a while. Joe Biden, former vice president of the USA, is Trump's main rival at the upcoming elections, so the pressure applied on Zelensky by the American president was immediately perceived as abuse of power for personal gain. As The Insider found out, one of the key actors who connected Trump's team and Zelensky was Sam Kislin, an entrepreneur with a long history of cooperation with Ukrainian and Russian organized crime. Building bridges between Trump and Zelensky, he used it to his own benefit in order to get rid of Ukraine's ex-president, Petro Poroshenko, and return his Ukrainian assets that had been seized during anti-corruption investigations.

Zelensky in the USA

On September 25, during the official visit of Ukrainian president Volodymyr Zelensky to the USA, two meetings took place in the vicinity of the Parker Hotel: one of them at the hotel itself, and the other one, in the next building, at the Russian Tea Room restaurant. The first meeting was formal and included Zelensky himself and a few more dozen participants. The second one, informal, was less populated, and Zelensky sent Andriy Bogdan, Head of the Presidential Administration, as his representative. Judging by the photographs and the accounts of two independent sources, Sam Kislin was at least present at the venue of the first meeting and both the organizer and a participant of the second one.

Who is Sam Kislin?

Among others, the FBI links Odessa-born Sam (Semyon) Kislin to the late Vyacheslav Ivankov (Yaponchik) of the Solntsevskaya gang and brothers Mikhail and Lev Chernoi (the Izmaylovskaya gang). Kislin never tried to conceal his friendship with the Chernoi brothers and even shared it in an interview to the NTV channel. Kislin's companies co-sponsored a visa for Anton Malevsky, head of the Izmaylovskaya gang, and were used for money transfers by Mikhail Chernoi (who was on Interpol's wanted list from 2009 to 2016). Kislin's name was mentioned in Mikhail Chernoi's court proceedings against Oleg Deripaska in London. The court concluded that Kislin had been doing trading business with Russia via Trans Commodities thanks to Chernoi's contacts, and not vice versa.Kislin's nephew Arnold Kislin was charged with hostile takeovers and bribes to Russian officials (the lawsuit against him was filed  in the USA by entrepreneurs Mikhail Zhivilo and Dzhalol Khaydarov).

Furthermore, Sam Kislin is known as a close associate and donor or former New York mayor Rudy Giuliani, who is now Trump's advisor. (Kislin prides himself on this friendship.) Allegedly, it was Giuliani who tried to have the Ukrainian law enforcement initiate investigation against Joe Biden's son.

In one of the photos, Zelensky exits the Parker Hotel with the meeting participants; two sources have confirmed that the man in the red vest (whose face we cannot see) is none other than Sam Kislin. 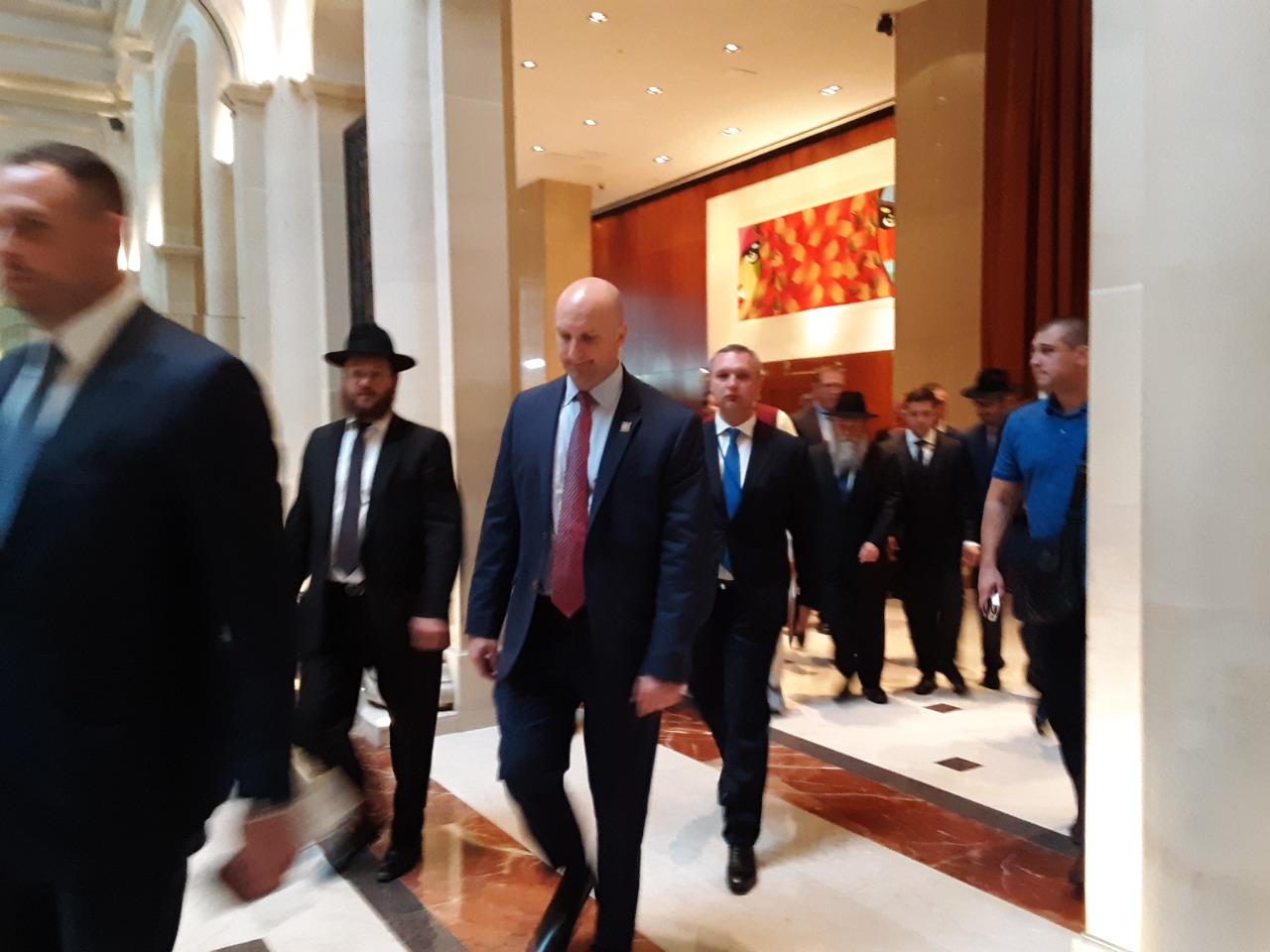 The second meeting took place behind closed doors and included only the selected few. The participants were not allowed to bring their cell phones into the room or take any photos. «This was a simple business meeting about American investments in Ukraine and vice versa, Ukrainian investments into American real estate,» explained The Insider's source. "Sam Kislin brought people together, saying who they needed to contact and who they should send their suggestions to."

Biden's case and the vendetta against Poroshenko

On October 1, it turned out that the U. S. Congress had subpoenaed Sam Kislin for testimony along with Lev Parnas and Igor Fruman. These American nationals of Ukrainian origin are believed to have organized last year's meetings between Giuliani and high-profile Ukrainian prosecutors in order to start an investigation of Joe Biden's son. We are yet to see any evidence of Hunter Biden's involvement in corruption, but Donald Trump is trying to leverage this 'investigation' as a weapon against his rival during the elections. In a phone conversation with Zelensky, Trump essentially named an investigation against Biden as a sine qua non condition of Ukraine receiving shipments of American arms (it is this outrageous abuse of power with the purpose of destroying a political opponent that constitutes the grounds for impeachment in the USA)

According to The Insider's source, neither Lev Parnas nor Igor Fruman was present at the meeting in the Russian Tea Room. At the same time, he confirms that, to his knowledge, both individuals have recently met with Igor Kolomoysky with assistance from Alexander Levin, the president of the  World Forum of Russian-Speaking Jewry,  and former people's deputy Vyacheslav Konstantinovsky (both of them had ties to the Kiev Donbass company, known for its connection to the Solntsevskaya gang). Kolomoysky, however, showed little enthusiasm.

In his interview to the NTV channel, Kislin admitted that it was he who convinced Giuliani to advise Trump to look into corruption in Ukraine. (The subject of Biden is not breached in the interview; the emphasis is on Petro Poroshenko). To remind you, in the 1990s Kislin was both a direct donor of ex-prosecutor Giuliani's run for Mayor and, even more importantly, the organizer or his fund-raising events. Having won the election, the grateful Giuliani appointed Kislin member of the New York City Economic Development Corporation, a body established by the Mayor's Office and managing the city's investments. Today, having also obtained the title of Honorary Resident of the city, Kislin speaks of himself as Giuliani's former advisor and friend as well as a friend of Donald Trump's. In the interview to NTV, Kislin asserted that he has treated Trump to borscht more than once. He admitted having known Trump since the late 1970s, when he supplied TV sets for Trump's hotel on credit.

Kislin has a monetary interest in involving Giuliani and Trump in the investigation. A source who knows Kislin personally explains that he is driven by a desire to return his assets that were frozen in Ukraine during Poroshenko's presidency when the law enforcement was searching for Viktor Yanukovich's money (paradoxically, Kislin calls the confiscation of Yanukovich's assets "an act of corruption"). Apparently, his interests revolve around Cypriot company Opalcore Ltd, which Kislin bought for $8 mln at a discount. Its accounts at Ukrainian banks contained bonds to the amount of $20 mln, which had been frozen. Including interests, the total balance reached about $23 mln. However, Kislin never got the money because it was seized by decision of the Kramatorsk Court on the case of Yanukovich. One thing is certain: while Poroshenko was in power, Kislin remained silent, but now that he has established a connection with Zelensky through the diaspora, he has picked up steam.

In August he suddenly came to Ukraine and started giving interviews, in which he positioned himself as an anti-corruption activist. In one of the videos shot in Kyiv, the «activist» appears on screen together with Dmitry Kryuchkov (in the white shirt), a defendant in a criminal case initiated by the National Anti-Corruption Bureau of Ukraine (NABU) to investigate the misappropriation of power supply company Zaporozhyeoblenergo and infliction of damage to Ukraine to the amount of 346 mln hryvnas (appr. $14 mln).

«Kryuchkov was not there by coincidence; he had had a meeting with Kislin, after which Kislin decided to show off in front of the press,» explains our source in Kyiv with connections in the investigative agencies. According to our source, Kryuchkov agreed to the fast-track proceedings and admitted his guilt after Zelensky's victory (prior to that, he had resided abroad). He claimed he had been «acting of Poroshenko’s orders» and none of it had been his fault.

Kislin and the Kremlin

A businessman with gangster connections, Kislin is trying to leverage both Zelensky's good graces and the Kremlin's propaganda machine. In the almost one-hour-long NTV interview, Kislin repeats every several seconds with great relish that Poroshenko is a thief, explaining how Poroshenko stole «dozens of millions of dollars» (the anchor positively asserts that there are documents to back these claims, but no evidence is presented). His other statements are downright ridiculous, for instance, his claim that he has «insider information» about Poroshenko paying $600,000 for a meeting with Trump. This «information» is in fact a footloose interpretation of a notorious BBC's piece about a $400,000 bribe to Michael Cohen for a meeting with Donald Trump, which included a reference to an unnamed source in the Security Service of Ukraine. Later the channel apologized and admitted that the information had not been verified.

Interestingly, Kislin's allegations have lately been promoted almost daily by such pro-Kremlin websites as Novorossiya and Russkaya Vesna.

At the time of publication, Sam Kislin refrained from comment. His representative in Ukraine, lawyer Dmitry Kasyanenko, informed The Insider: «I forwarded him [your questions], but he said you would twist his words anyway.» Andriy Bogdan ignored The Insider’s enquiry. Volodymyr Zelensky’s press service has remained silent so far, but we have lodged an official enquiry.