"Aleksei Uchitel got his $1 million in a bag": Matilda's co-author sheds light on the Kremlin slush fund

Matilda, an Aleksei Uchitel movie inspired by the affair between Russian emperor Nicholas II and ballet dancer Matilda Kshesinskaya, will not hit the theaters until October but has already been dubbed Russia's most memorable movie of 2017. First, Orthodox Christian activists demanded that the movie be banned for «insult to the feelings of believers» after a campaign launched by ex-prosecutor and Duma deputy Natalia Poklonskaya. However, Putin's spokesman Dmitry Peskov urged them to see the movie first. While the general public is busy condemning the dubious portrayal of Nicholas II and his court, The Insider is investigating the movie's ties to another almost royal court – Putin's entourage. According to Vladislav Moskalev, one of the project's co-founders, the movie was funded by an offshore Gazprombank subsidiary in exchange for a bribe to the head of the Administrative Directorate of the President of the Russian Federation, with direct participation of Vladimir Vinokur, a famous comedian.

«I was the one to name the project 'Matilda,'» entrepreneur and producer Vladislav Moskalev tells The Insider. He started working on the movie in 2010 together with a friend of his, Oleg Fraev. "Initially, the Matilda Project (along with my previous project, Kremlin Gala) was registered with Art Mir, a company owned by Fraev's daughter. On its behalf, I applied to the Cinema Foundation of Russia to secure partial government funding for Matilda."

In the meantime, Moskalev was developing his other project, Kremlin Gala – a series of gala concerts by world-class ballet stars that still take place every year at the Grand Kremlin Palace. (Being married to Svetlana Lunkova, a Bolshoi Theatre prima ballerina, Moskalev knows his way around the world of ballet.) He asserts that the name «Kremlin Gala» was suggested by Maria Zakharova, the current foreign ministry spokeswoman and his personal acquaintance.

«Living between two countries, I couldn't run a Russian company of my own, so it was all about informal agreements,» continues Moskalev. "In June 2011, my friend died from a heart attack and Art Mir ceased to exist, leaving my two projects hanging. This was when I handed them over to Vladimir Vinokur, whom I had met a little earlier. I suggested that he put Matilda and Kremlin Gala under the aegis of his foundation (previously Foundation for the Support of Parody Theatre, currently Vladimir Vinokur Foundation for the Support of Culture and Arts). He was the foundation's sole proprietor and signing authority. I was not a member of the staff and therefore wasn't authorized to sign anything. However, I was short of options, as I couldn't have completed these projects on my own."

And this was where it got interesting.

"Vinokur undertook to arrange funding with Vladimir Kozhin (the then head of the Administrative Directorate of the President of the Russian Federation), whom he had known for about fifteen years. The three of us gathered at his office. Besides, Kozhin's office is located right opposite Vinokur's theater. <The Insider's note: Building 5, 2/5 Slavyanskaya Square, is indeed not far from the President's Administrative Directorate>. In our presence, Kozhin dialed a number on the phone and commanded “ten.” Gazprombank wired the money to Cyprus, from where an offshore company called Tradescan Consultants Ltd (100-percent Gazprombank's subsidiary in Cyprus) transferred us $10 million for the movie. As I understood, another $10 million was procured by Andrey Akimov, Chairman of the Management Board at Gazprombank, to the account of the Vinokur Foundation.

It is a sort of a slush fund for Kremlin officials, a stash of non-reimbursable money. On paper, they issued us a loan, but the parties had signed a loan waiver in addition to the agreement, which was conveniently overlooked by the Cypriot authorities."

The Insider has studied the agreement between the Vinokur Foundation and Tradescan Consultants Ltd on a $10 million loan (with a loan waiver as an addendum) and Gazprombank's consolidated balance sheet as of January 1, 2012. Along with hundreds of other offshore firms, the list of consolidated banking group members includes Tradescan Consultants Ltd (still operating and mentioned in the 2016 sheet). Moskalev believes that, after he quit the project, its funding reached $40 million. He clarifies that the offshore scheme made sure the borrowers did not have to repay the loan – which would have been mandatory if they'd taken it from the Moscow office. 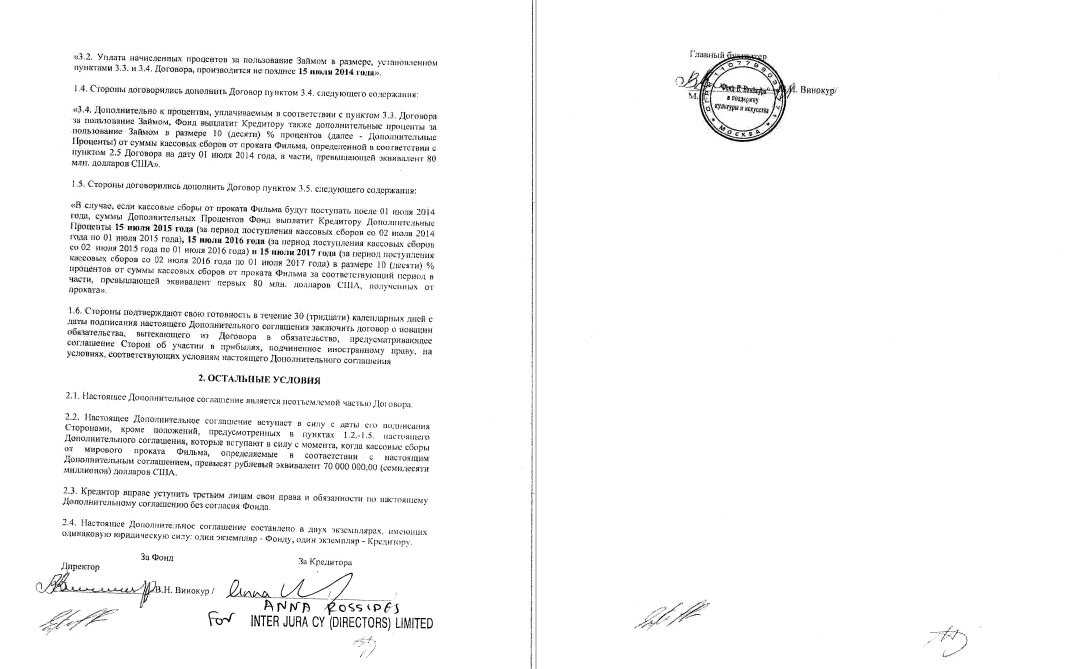 The Insider also studied the addendum to the loan agreement between Tradescan Consultants and the Vinokur Foundation signed in 2011. Under the addendum, the Foundation is relieved from debt unless Matilda yields a certain amount of box office profits in 2014 or earlier. Considering that the movie had not reached theaters by 2017, this condition was not hard to fulfill.

Kozhin had his own share of the pie too, says Moskalev:

«As soon as we got the money, Vinokur said: 'Now it's our turn to be generous. Kozhin is a wealthy man, so money is out of the question.' Mikhail Sheynin, the then manager of the Vinokur Foundation, sends him several photos of watches that we could present to Kozhin, and Vinokur shows me one: 'What do you think?' Prices vary from $250,000 to $400,000. I say, 'You've known him for ages – you choose.'» Eventually, he went for the most expensive one, using some of the money we got for the Kshesinskaya project. Later I saw him carry the gift to Kozhin across the street. The watch he got for his assistance with Matilda must have been the 10th or the 20th in his collection."

"Before I met Vinokur, he had taken a $1.8 million personal secured loan at VTB to buy a building in Moscow downtown from the city administration for his Vladimir Vinokur Parody Theater. The property was registered in his name and was pledged as collateral at VTB.

As soon as the first lump sum for Matilda arrived, Vinokur wanted to repay his loan to the bank in full. He told me in so many words: «Slava, I've taken a personal loan from VTB, and I'd like to repay it with the Matilda money to release the property from pledge. I'll then return the money to the foundation's account.»  Where was he going to get the money? It was simple. He suddenly dropped the idea of creating his own theater with a permanent stage (he normally rented a stage for his company) and decided to sell the real estate at market value. Having purchased it from the city of Moscow for a meager $1.8, he was going to sell it for $10 million – a moderate free-market price for such a property. Essentially, Vladimir Vinokur seized a building in the center of Moscow.

In November 2011, he received the first $10 million for Matilda, and as early as in January 2012, he repaid his personal loan to VTB in full. With the Matilda money. Half a year later, he accused me of stealing the $1.8 in question. To add insult to injury, they made me responsible for other debts."

In 2012, Moskalev was squeezed out of the project. On November 1, 2012, the Investigation Directorate of the Russian MIA General Administration for the City of Moscow initiated a case on the embezzlement of 117 million rubles at the Vinokur Foundation against persons unknown. However, Moskalev is the one under investigation: in 2013, Russian police placed him on an Interpol wanted list under the charges of «abuse of authority,» but Canada refused to extradite him.

According to Moskalev, «money laundering is common practice in moviemaking,» but the movie about Kshesinskaya went beyond all reason.

"Even Aleksei Uchitel, the director, got a share as an advance payment: $3 million for his company, Rock, and another million dollars in cash. I saw him carry the money in a dark-blue bag from Vinokur's office in Slavyanskaya Square with my own eyes. I don't know why he would need so much cash, but it was a matter of convenience, I guess. However, instead of starting to shoot Matilda, Uchitel rejected one version of the script after another while shooting a project for Channel One. Eventually, the Vinokur Foundation issued him a letter before claim. We wanted to fire Uchitel and made sure both Kozhin and Vinokur were on our side. Vinokur had ties to Putin's close entourage, so our plan seemed fail-safe. 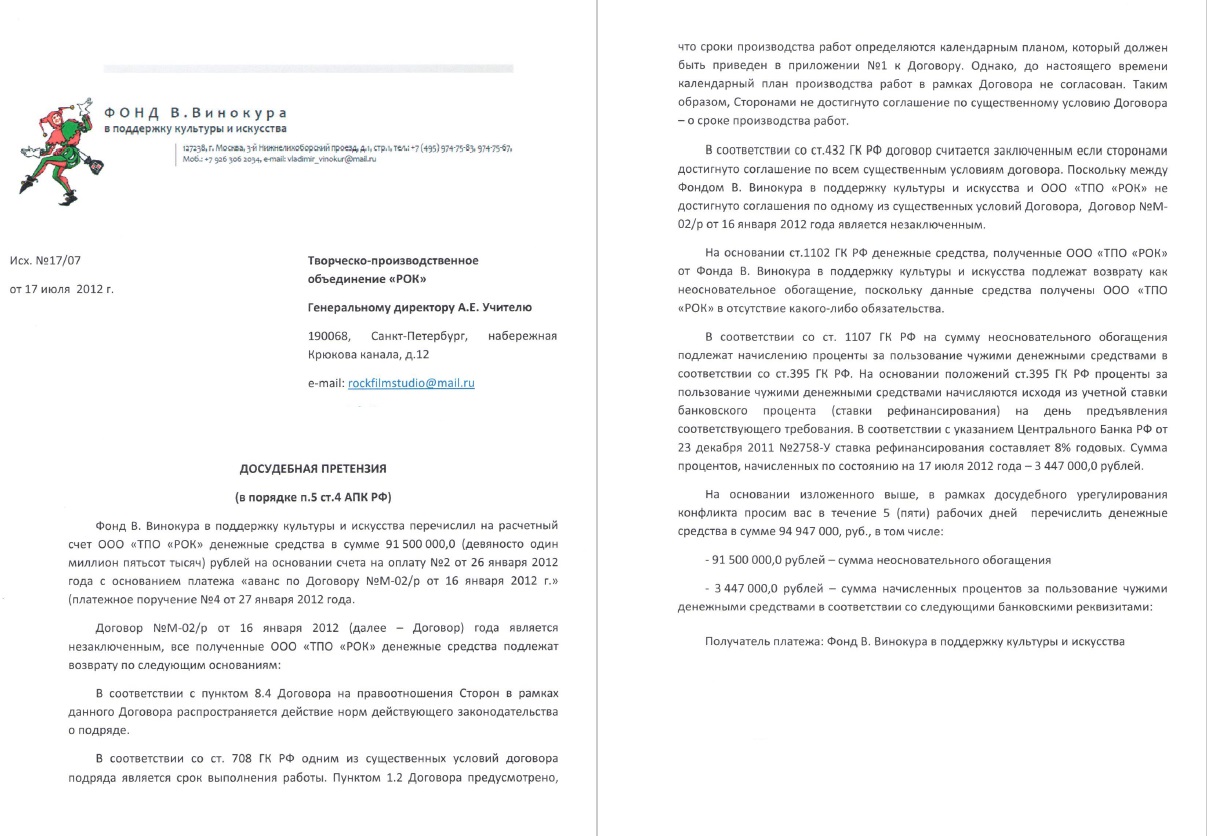 However, I had missed the fact that Uchitel happened to be making a documentary on conductor Valery Gergiev, and the two had gotten close. Incidentally, Gergiev was even closer to Putin than even Sergei Roldugin. Thus, Putin had sent Gergiev to the UK as an unofficial ambassador to the Queen. I saw Alexei Kudrin, the Minister of Finance, wait in the lobby at five in the morning to meet Gergiev, because the latter likes to work before seven... In brief, Uchitel complained to Gergiev that I was about to hand the project over to Americans.

Without paying much heed to detail, Gergiev phoned Putin, or simply threatened to do so. Kozhin was the first to back down: 'I could have overreacted. Let's rehire Uchitel. The Americans are about to take over, and we all know Putin's distaste for them.' Vinokur was only too happy to oblige, and they pushed me out." 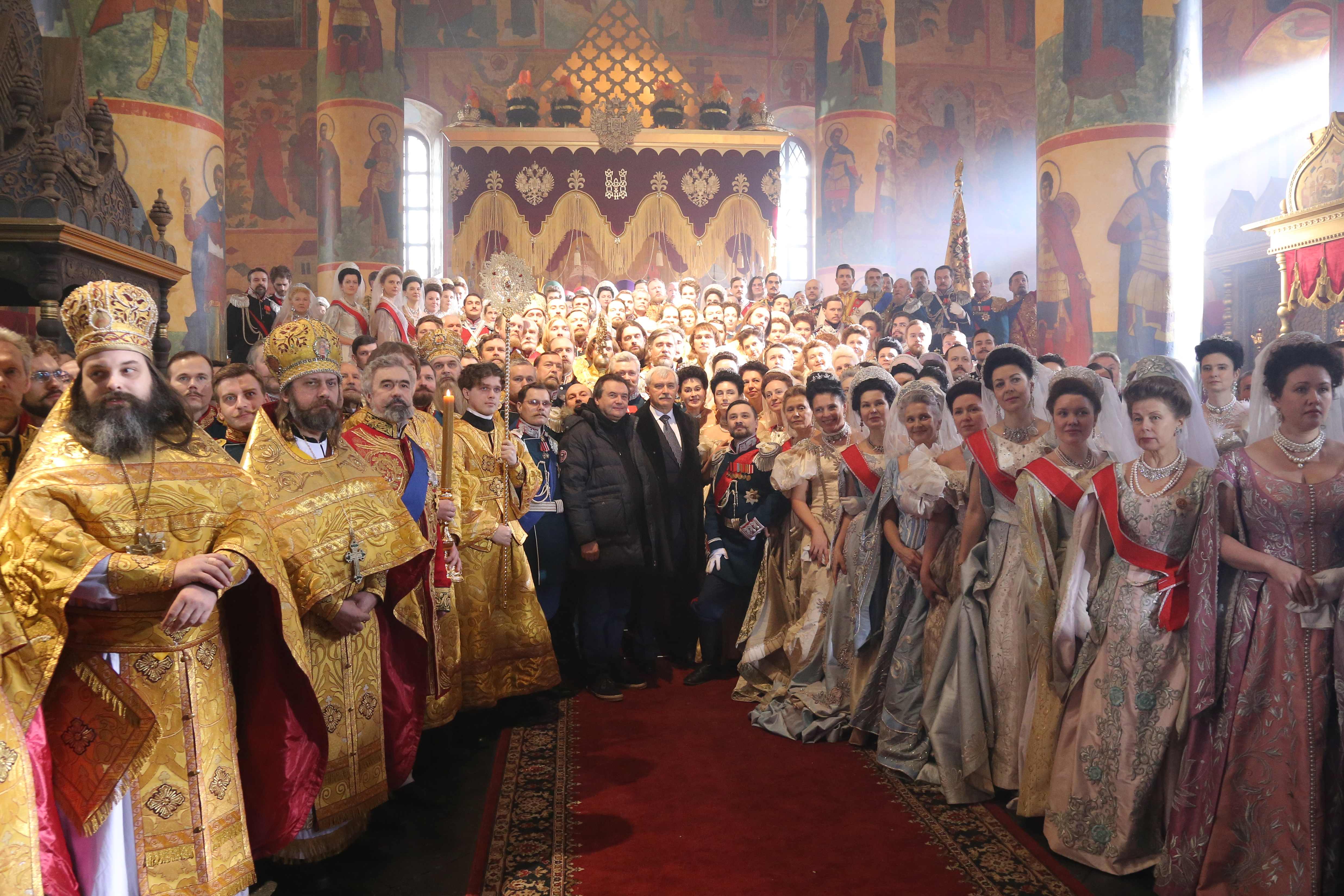 Moviemaker Aleksei Uchitel and Governor of St. Petersburg, Georgy Poltavchenko, at the set of Matilda

As to why Kozhin was taking such liberties with Gazprombank's funds, Moskalev says the following:

"The money transfer was Kozhin's call. He was the one who commanded that the money be wired, and he was the one managing the offshore firm. How much money could this company have on its account if Kozhin did not hesitate to order a $20 million transfer in full understanding that he may never see the money again? My guess is at least $2–3 billion. I am convinced there are hundreds of similar offshore firms that are hiding cash for Putin and his entourage, including Kozhin. Each of Putin's closest friends (there are about 20, and Roldugin is not the most affluent – not by a long shot) has their own quota in the slush fund and can use it at their own discretion.

I have little doubt that all the Gazprombank's offshore firms are also part of the slush fund, and Gazprombank's assets comprise the bulk of the fund, although not all of it."

Two more interviewees who had previously done business with Vladimir Putin's entourage confirmed that our scheme of joint control over assets is generally accurate, although they refrained from giving their own estimate as to the size of the fund.

The Insider has also requested comment from everyone mentioned in the investigation. Hearing Moskalev's name, Vladimir Vinokur said, «You should be calling the law enforcement. The man is on the Interpol wanted list, so what are you calling me for?» and hung up. Kozhin's office refused to provide any comment. Duma deputy and ex-prosecutor Natalia Poklonskaya requested paper copies of the documents, including the loan waiver (we have satisfied her request, but we are yet to see what she will do with the documents). MFA spokeswoman Maria Zakharova admitted being acquainted with Vladislav Moskalev and specified they had been introduced to each other in New York by Andrey Kozyrev, who was Russia’s foreign minister in the early 1990s. However, she refrained from taking sides and only said she was sorry to have seen such nice people fall out with one another. At the moment of publication, The Insider has not been able to reach Valery Gergiev.